8.Corporate
Citizenship
Caring About What We Do

TMK’s HR policy sets out priority areas for the development of the Company’s human capital we need to focus on to achieve our strategic business goals.

In a volatile economic environment, we have placed priority on retaining highly skilled staff, streamlining our governance system and standardising the organisational structure at TMK’s entities. We also believe it important to keep our staff up to date with current developments, our achievements and future plans. We achieve our targets through shared understanding of goals and objectives, strong performance of the Company’s management, and building a dialogue with our social partners.

We seek to consistently enhance our staff’s performance by continuously raising their qualification and professional level while eliminating inefficient functions, reducing non-production losses and reducing the number of management layers.

In 2015, we placed a particular emphasis on minimising the negative impact of economic shocks on our performance through cost optimisation and improvements to our corporate governance system. To this end, we:

As a result of our efforts, we successfully reduced the average total headcount, even as the number of TMK’s entities grew.

We make consistent efforts to motivate employees towards achieving professional growth and to foster an environment supportive of such growth.

In 2015, TMK invested about USD 1.5 m in corporate training and career enhancement programmes, which enabled us to continue the implementation of a number of initiatives, including 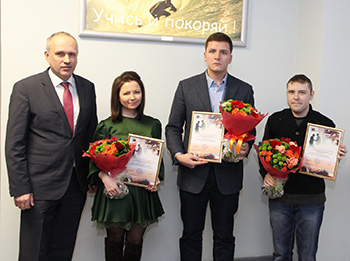 We seek to recruit young talent trained to advanced educational standards, and to this end we get involved in their professional training through collaboration with educational institutions in the countries and regions where we operate.

In 2015, we focused on building a staff motivation system that would be adaptive to changes in operational and strategic objectives.

We drafted our Concept of Unified Remuneration System for the Russian division’s facilities, providing for standardisation of all types of financial compensation for employees and linking remuneration to performance against individual KPIs by the relevant employee. This will help to enhance the motivational role of wages and salaries and automate pay calculation. The project is scheduled for implementation in 2016–2017.

The Company reviews the base remuneration rates for its staff on an annual basis, taking into account the macro-economic situation, regional trends in the labour market and staff performance. Using this approach, we were able to raise the pay levels of the Company’s employees (in the respective local currencies of the countries they are based in) while keeping our overall payroll figures relatively flat. In a challenging market environment, the Company makes sure that its wages and salaries remain competitive in the regions where TMK’s facilities operate, while meeting its social obligations, making cost-of-living adjustments to salaries provided for in agreements with industry trade unions, and complying with national laws.

Nevertheless, due to currency swings, the average pay at TMK’s facilities has been trending downward over the last two years if translated into US dollars.

In 2015, our stability and success relied, among other things, on the social partnership maintained with trade unions of TMK’s entities, and with national industry associations of trade unions. 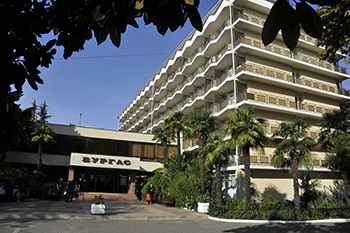 Entities across divisions strictly follow the principles of social partnership, balancing the interests of all stakeholders:

In 2015, TMK, as a member of the Russian Metallurgists Association, was actively involved in negotiations with the Russian Mining and Metallurgical Trade Union on a supplementary Agreement that would extend the current Branch Tariff Agreement to 2016. This will allow us to bring budget indicators of TMK’s Russian entities in line with the rates set out in the 2016 Branch Tariff Agreement.

We are actively engaged, through Non-Profit Partnership Russian Steel, in building a consolidated industry position on production, technologies, investments and further representation of professional interests of Partnership Members before government and other institutions and organisations.

TMK IPSCO and the US United Steelworkers Union maintain successful relationship under the Collective Bargaining Agreement the Ambridge and Koppel plants.

The negotiations on the terms of the Agreement with Romanian trade unions served as the basis for Collective Bargaining Agreements at TMK-ARTROM and TMK-RESITA.

The motto of TMK GIPI, “We Add Value in Everything We Do”, reflects the company’s approach to all areas of its activity – both in business and social initiatives. TMK GIPI is actively involved in infrastructure projects and provides financial support to initiatives of the Municipality of Sohar (Oman).

In 2015, we continued financing all our programmes aimed at improving health and expanding the range of recreation opportunities for our staff, in particular:

We attach particular importance to non-financial motivation and recognition of our best employees and business partners: 92 employees of TMK were recommended for national and industry awards, 282 employees were awarded corporate badges and certificates, while 14 people were awarded Badges and Certificates For Business Cooperation with TMK.

Successful implementation of the Company’s social policy ensures social stability in our teams and in the regions where we operate.